Hendaye lies on the Spanish border between the sea and the mountains. It is part city, part beach, with a variety of things to discover. Your programme for the day has already been planned.

Start by taking the Coastal Track along the cliffs north of the city for a stunning view over the bays of Figuier and Hondarrabia in Spain. Once on the cliff track, a protected natural park, you can enter the Domaine d’Abbadia. The extraordinary Neo-Gothic Chateau Antoine d’Abbadie is a must-see. It was built in 1864 and includes an observatory. It was decorated in the eccentric style of its owner.

Head back to the Grande Plage and check out the two imposing rock formations known as Les Deux Jumeaux, or the “twins”, the distinctive feature of this town. This sand spit stretches over three kilometres. Swimming or surfing, the choice is yours!

On the promenade which runs along the beach, take a look at the Moorish architecture of the former casino. This spot also marks the starting point of the GR 10 hiking trail that crosses the Pyrenees from west to east.
The city features luxurious vegetation with many different species of trees: tamarix, palm trees, eucalyptus, mimosa and bay trees.

Keep walking towards the town, you will see Neo-Basque architecture from the early 20th century, typical of the city. Walk down to the charming port of Caneta and look out over the bay of Txingudi, and on the other side, Spain. As you walk back up you will see the home of writer Pierre Loti, built in the Moorish style.

As the night falls, hop over to the Spanish side for some tapas! 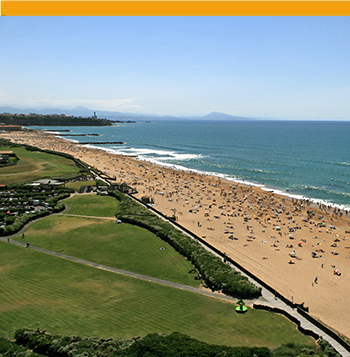 This two-facetted town between sea and pine forest is located between Bayonne and Biarritz. You can enjoy all sorts of sports including surfing, golf, treetop adventure trails and cycling; and cultural activities such as the Biennale Internationale d’Art Contemporain and the Théâtre Quintaou, with the “national stage” label, not forgetting the gigantic flea market! 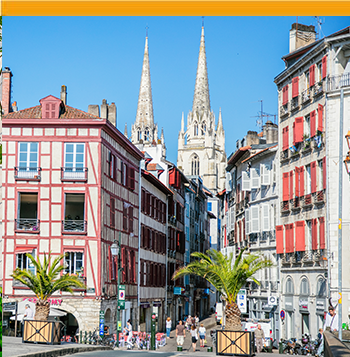 Bayonne is a real hub of Basque culture. It has everything: architecture, including the traditional timber-framed houses, gastronomy with ham and chocolate, sport with rugby and pelota, traditional dances, festivals, including the famous Fêtes de Bayonne, three museums presenting fine arts, Basque history and natural history, and bullfighting in the arenas! 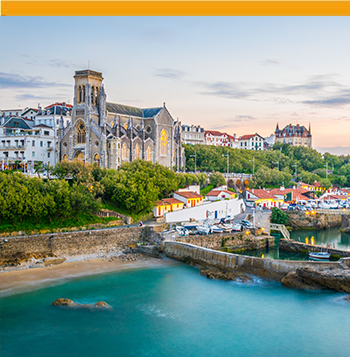 Around the marketplace, a relaxed urban atmosphere fills the bars and restaurants, spilling out onto the streets. Tapas and traditional dishes can be enjoyed on the terraces.
Take on the waves at one of the four beaches in this seaside city, then walk through the streets to discover a rich variety of architecture. 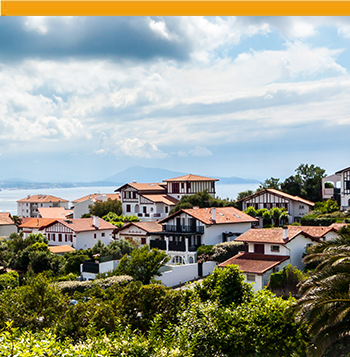 Bidart is a charming town with a variety of activities on offer. Laze about on one of the six beaches, take a walk along the Coastal Trail or allow yourself a moment of contemplation from a high lookout point over the sea, the mountains and the sunset. Would you like to learn to play golf? Visit the Ilbarritz International Training Centre. 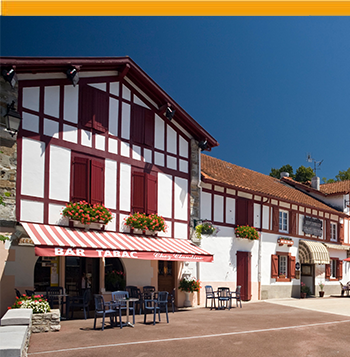 A food-lover’s town, with a Chocolate Museum and a Gateau Basque festival. It has a rich heritage, as evident in Villa Arnaga, the former residence of writer Cyrano de Bergerac, which is now a museum. Enjoy peace and simplicity at the heart of this inland town. 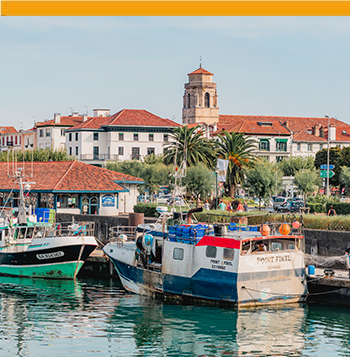 A charming fishing harbour, a beach sheltered from the waves, a pedestrian town centre with lovely boutiques, botanical gardens on the Archilua cliff, located on the Coastal Trail, and architectural heritage tours. All of this awaits you in this renowned seaside town.